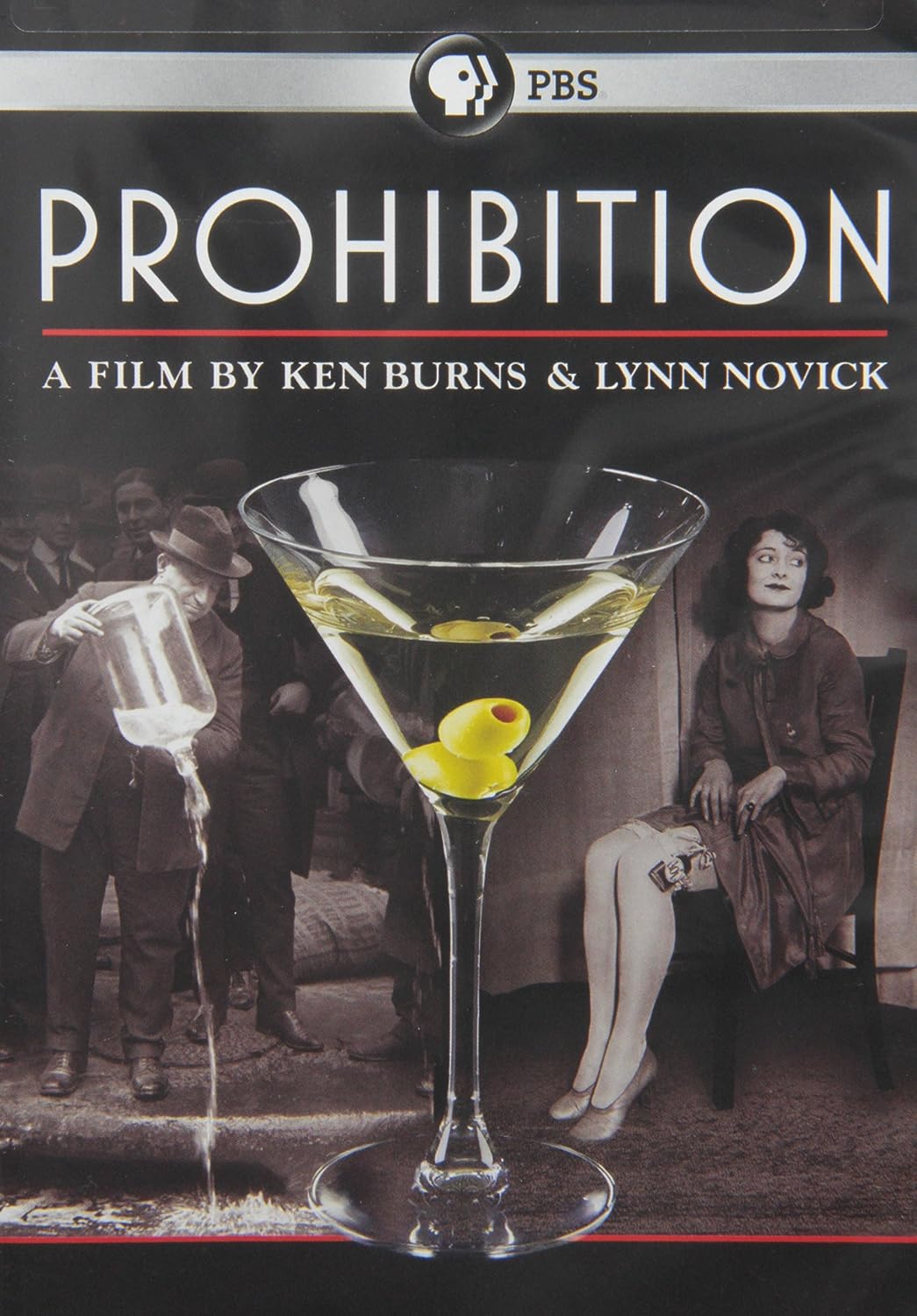 PROHIBITION, directed by Ken Burns and Lynn Novick, tells the story of the rise, rule and fall of the 18th Amendment to the U.S. Constitution. The film starts with the early history of alcohol in America and examines the 19th-century temperance and progressive movements through the repeal of the 18th Amendment in 1933. This 6-hour, three part documentary also includes over 2 hours of bonus content.

It's hard to comprehend now, but nearly a century ago, Americans were denied both the pleasures and evils of alcohol for a period of almost 14 years--a strange and tumultuous time chronicled in edifying detail in Ken Burns and Lynn Novick's Prohibition, a three-part (and three-disc) documentary first broadcast by PBS. Part One, "A Nation of Drunkards," contemplates the lead-up to Prohibition. And a long lead-up it was, as preachers, women alarmed by their husbands' debilitating drunkenness, and others were railing against the evils of drinking nearly 100 years before the 18th Amendment, which banned "the manufacture, sale, or transportation of intoxicating liquors," went into effect in January 1920. Calls for temperance in the mid-19th century soon gave way to strident demands for total abstinence, influenced by groups like the Women's Christian Temperance Union and the Anti-Saloon League, along with self-righteous crusaders like Carrie Nation (who wielded a hatchet as she decimated drinking establishments in her home state of Kansas). Once the federal income tax was introduced, thus eliminating government dependence on liquor taxes--which at one point accounted for 70 percent of all US revenue!--the path to passage of the amendment was cleared. But in their zeal to impose their morals on the rest of the country, the "Drys," as they were called, failed to foresee that enforcement of the amendment and its harsh enabling legislation, the Volstead Act, would be nearly impossible. That issue is examined in Part Two, "A Nation of Scofflaws," which describes the deluge of bribery, corruption, defiance of the law by ordinary citizens (the "Wets"), and, perhaps most notably, the enormous amounts of money to be made from the distribution of illegal liquor (which in turn led to the rise of Al Capone and many, many other powerful gangsters) that came in the law's wake. In Part Three, "A Nation of Hypocrites," we witness the ultimate failure of Prohibition, culminating in the repeal of the 18th Amendment in 1933. In the end, we're told, the rigid religious fundamentalism of the Drys, who refused to consider even the slightest modification of the law, was the principal cause of its downfall--accompanied, of course, by the simple fact that people love to drink.

This is a fascinating subject, and Burns, Novick, and their collaborators present it with the precision and flair seen in other Burns documentaries, combining comments from historians and other experts, evocative music, a wealth of photos and film footage, and wonderfully rich personal stories (with period reminiscences read by actors like Sam Waterston, John Lithgow, Philip Bosco, Samuel L. Jackson, Patricia Clarkson, Tom Hanks, and Blythe Danner) in a rich tapestry of information and entertainment. Prohibition is not to be missed. --Sam Graham

Free delivery on all orders over £50
Trustpilot

Drizzle, splash & stir in the flavour

Add an explosion of flavour to your food with our unique collections of olive oils and balsamic vinegars.

Improve the good, enhance the great and savour even the simplest of meals with our family made olive oils and balsamic vinegars.
Discover new levels of food enjoyment.
A taste for anyone. A taste for anytime.

Traditional or infused, savoury or sweet, our superb range of balsamic vinegars deliver a taste experience like no others.

The Gift of Oil brings your food to life in the simplest of ways.
Love Food. Love Flavour.

Incredible on their own and even better together. Our oils and balsamics perfectly compliment each other! Lemon oil with Mango & Passionfruit balsamic. Basil oil with Sundried Tomato balsamic. Lime & Chilli oil with Garlic & Ginger balsamic…Use together to take food enjoyment to mouth-watering new heights!

Fancy building your very own Gift of Oil collection and making BIG SAVINGS too? Take a look at our fantastic bundle offers to find out how..... the more bottles you order the bigger the savings to be made!

Drizzle, splash or stir our exceptional oils and balsamics into all sorts of dishes to make everyday food taste great and good food taste fabulous!
Fall in love with flavour.
Find out how it all started right here.

Drizzle over, splash on or stir through our exceptional olive oils and balsamic vinegars, discovering new levels of food enjoyment. Fall in love with flavour with The Gift of Oil.

Our little book
of inspiration

Download our little book of inspiration.
It's jam packed full of ideas to take your everyday meals to another level!
Enjoy amazingly tasty food every day!

Richer, thicker and more intense than our Classic balsamic, our Reserve adds a splash of sophistication to any dish.
Superb over sea bass, salmon, blue cheeses and brie, field mushrooms or thick juicy steaks!

Mellow, fruity, low in acidity and absolutely ideal for everyday use.
Perfectly balanced, well rounded and simply delicious!
When mixed with our Sicilian oil makes an unbelievably gorgeous GO TO salad dressing!

Our most popular infused balsamic is wonderful on it's own over feta, goats cheese, Greek yoghurt, strawberries or ice cream.
Totally delicious too when mixed with one of our citrus oils as a salad dressing or as a yummy dip with fresh bread!

Fresh, green and grassy, our best selling oil is like "Summer in a bottle!"
Simply drizzle it over anything - meats, fish, seafood, vegetables, salads, soups....you can't go wrong!

Lovingly made by cold pressing freshly picked lemons together with selected Cerasuola olives and then gently infusing the oil created with the zest of additional fresh lemons.
Delicious over fish, chicken, prawns, crab and crushed new potatoes!

Take a look at our extensive library of recipes for simple, mouth-watering examples of how to use our olive oils and balsamic vinegars

Come along to our exhibitions at food festivals across the the UK. Sample products, ask the experts and let us show you how to easily transform your dishes.

*UPDATE* Unfortunately, due to the current Covid – 19 pandemic, all our events in 2020 have had to be cancelled.
We were hopeful that some of our Christmas shows and markets would still be allowed to go ahead but sadly this has not transpired.
We really do miss doing them and meeting our wonderful customers, some of whom we have serviced this way for 20 years now!
Let’s hope things get back more to normal next year and in the meantime not to worry, you can still order all of our products online as per usual!
HURRAH!

What people are saying

Trustpilot
Do NOT follow this link or you will be banned from the site!